The Redback spider is a species of venomous spiders which are primarily in Australia.

The Redback spiders are recognised by their red strip which is on the top of their body.

Did you know that the Redback back spider is nocturnal and feeds on their mating partner once done with mating with the male Redback spider.

Each female can hold onto the sperm for up to two years and can reproduce at all time, often with several batches of eggs which is usually around 250 eggs per cycle.

Spiderlings hatch from their eggs after about 8 days and can emerge from the egg sac as early as 11 days after being laid.

Redback spiders are very toxic to humans and there has been an anti-venom shot for those who have been bitten since 1956.

Bites are from females Redbacks as the male Redbacks have much smaller jaws that are unable to penetrate human skin.

Roughly 200 to 300 hundred people across Sydney get bitten each year from The Redback spider.

Redbacks live across the continent, but are becoming more prominent across Sydney due to high humidity, this is becoming more of a problem as Redbacks are coming through the bathroom exhaust fans and down through the down lights throughout the home.

Redbacks prefer to spin their webs on the sunny side of the house Redbacks loves hiding under steps, on downpipes and in children’s toys and old bikes.

Here at Pest Free Sydney we can do a targeted Redback spider treatment which all of our qualified technicians identify target and treat all affected areas.

Call out free call number (1800 15 30 10) to speak to one of our friendly staff who will be able to give you advice and book you in for a targeted Redback spider treatment. 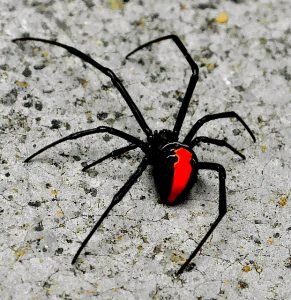