The control of stored product pests requires a high degree of professionalism & knowledge. Pest management programmes must utilize combinations of techniques that are effective and which emphasize prevention of food product contamination. These programmes must be directed at immediate pest problems; at preventing future infestation problems; and must respond to routine daily needs, yet be flexible to meet emergency pest control situations.

PESTFREE Pest Control is HACCP accredited. Our clients receive the highest standard of integrated pest management coupled with excellence in food safety. Unsatisfactory control of pests results in contaminated products that can cause health, financial, legal and aesthetic problems. Financial losses can result from (a) presence of live or dead insects in products and containers; (b) presence of odors, webbing and frass in products and containers; (c) loss in faith in the company by the consumer because of these conditions; and (d) direct loss in weight resulting from insect feeding.

Insects are important pests of cereal grains and stored food. Under optimum conditions many of the species can complete their life cycles in less than 30 to 35 days and lay many eggs. This results in rapid build-up of populations that consume and contaminate various stored products. Most stored product insects are either beetles or moths. Both have complete metamorphosis, i.e., they have four distinct developmental stages: egg, larva, pupa and adult. The larval stage is “worm-like” or “grub-like” and differs in appearance from the adults. Often, people do not associate the “worms” with the adults which produce them. Growth occurs in the larval stage and after transformation to the adult there is no further growth in size. Beetles are characterized by rather hard, shell-like bodies with the forewings modified into covers (elytra) which overlay the back of the insect and protect the thin membranous flight wings (if present) folded underneath. The adults of most of the stored-product beetles live and feed in the same food materials as the larvae.

Both have chewing mouthparts.

Moths that infest cereal grains and stored products have scales covering the wings and bodies. The larvae are caterpillars which do not resemble the adults—they have chewing mouthparts while adults may have coiled siphoning tubes suitable only for liquid food. Since liquids are usually not available to them, adults normally do not feed. Therefore, the moths usually only live long enough to mate and lay eggs. 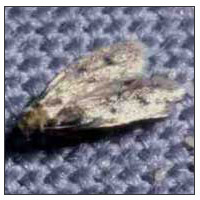 So named because the larvae carry their pupal cases about as they feed and travel. Look for the faint, dark smudges on the wings of the adult. The wings have a very slight, darker, dusky appearance, compared with the clothes moth, giving it a slightly dull appearance. The eggs are visible only under a low-power microscope. The larva of the Case-Bearing moth is much more easily identified because of their cases, open on one end, and dragged about, wherever they go. The larvae only expose the first few segments, staying within their case for protection. The larvae never leave their cases and when ready to pupate, will seal off both ends of the case. When the adult finally emerges, they cut through the end of the thin silken case. The Case-bearing moth is usually found around carpets and heavy woollen draperies. 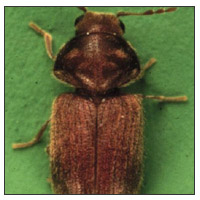 The adults, the ones you will usually see, are small, about an eighth of an inch long, light brown or even red in colour and have a “humpback” appearance. They look almost identical to the Cigarette beetle. The wing covers of the Drugstore beetle have distinct grooves running from front to back. Cigarette beetles have smooth wing covers. Larvae of Drugstore beetles are hairless, the Cigarette beetle larvae look like they have a fuzzy coat. Drugstore beetles feed on all kinds of foods and spices, including leather and furs, hair, drugs and books. Depending on conditions, they can have as many as four generations per year. Normally, however, they have one generation per year in residential situations, so they are rather long-lived. The females lay their eggs in singles, in the product they are infesting. The larval stage can last as long as five months, followed by a relatively short period of less than three weeks in the pupal stage. Infested food products should be discarded, other materials, such as books and manuscripts can be treated. 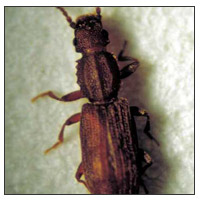 The adults, (the ones you usually see) are small, thin, dark brown insects less than a quarter inch long. Sawtoothed grain beetles are major pests in factories, homes and granaries. They feed on a very wide variety of products, flour, bread and cereal products, macaroni, dried fruits, nuts, sugar and even improperly cured meats. They are named primarily because of the six sawtooth-like teeth found on the two sides of the first segment behind the head, the pronotum. Sawtoothed Grain Beetles are very small, flat insects that easily hide in the cracks and crevices of food packages, can penetrate the packaging and infest the product inside. An adult female will lay, over her lifetime, almost 300 shiny white eggs in the food they are infesting. Eggs hatch into tiny, yellow-white larvae, about an eighth of an inch long, and have three pairs of legs and a false pair. A larva will moult as many as four times and, depending on conditions, will complete this cycle in slightly less than a month. If conditions are not ideal, that cycle could take almost a year. Sawtoothed Grain Beetles can develop into very large populations in stored food products. Adults feed on the same materials as the larvae. 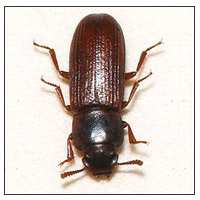 Flour beetles, most notably the Confused flour beetle and the Red flour beetle look very much alike. Slender, beetlelooking insects, they are reddish-brown and about an eighth of an inch long – about the size of a grain of rice. Both are major pests of flour and flour products. They cannot penetrate nor feed on whole grains, but can be found in virtually any other processed food product. This includes anything manufactured with flour products, dried fruit, spices, chocolate products and even tobacco products. This is the pest you find most often in those too-old cake mix boxes. Adult females will deposit as many as three or four of their sticky white eggs, per day, in the product itself, or in the cracks and crevices of packaging materials. They can produce as many as 400 to 500 eggs in their lifetime. Eggs hatch in about two weeks and the tan coloured larvae go through as many as 12 moults, reaching adult stage in about a month. Ideal conditions produce as many as six or seven generations in a year.Any product infested with these pests acquires a rather distinct odour (and flavour) as a result of secretions from their very active scent glands. 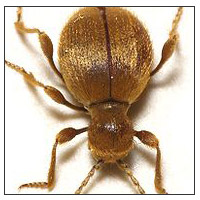 There are several kinds of spider beetles. The one pictured is the brown spider beetle. They have the same oval body conformation, just different colouring. Spider beetles are very small, with oval bodies, long legs and bodies covered with short hairs and rows of small pits running the length of their wing covers. The head is invisible, viewed from above. They look like very small spiders. Spider beetles can remain active during cold weather, and can be difficult to control because they also infest such a wide variety of products. The larvae develop on the foods they eat and old storage buildings can harbour infestations in collections of stored products. They can also bore into wooden and cardboard items to pupate. 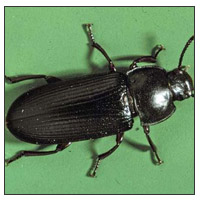 The rather large Yellow meal worm, are shiny black beetles, a half inch long, with well-developed wings. They are accomplished fliers and are attracted to light. They are named for the larvae, which are more than an inch long, hard-bodied and bright yellow. Seldom a pest in homes, they are, however, major pests in storage facilities, in dark, undisturbed locations. They feed on these forgotten residues, overwinter in the larval stage and emerge, in the spring, to begin feeding on the food they are infesting. The adults can lay up to 300 eggs and will live about three months. The entire life cycle takes a year. 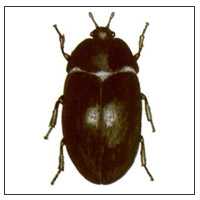 The Fur beetle and the Black Carpet beetle are usually described together, the only difference is the Black carpet beetle has white or yellow hairs on the wing covers. The larvae look hairy, with colour bands, have a tuft of hairs at their posterior. Larvae avoid light and when disturbed, will “play possum” and remain immobile for a short time before resuming activity. The larva will pupate, invisibly, at the last moult, right inside the last larval skin. New adults will even remain inside the last skin for up to three weeks, before flying off to feed on the pollen and nectar of flowers. The adult stage is attracted to light. The adults are essentially outdoor insects, mate and feed on flowers. After mating, the adult females seek out places to lay a total of almost a hundred eggs in any material that will support the larvae. 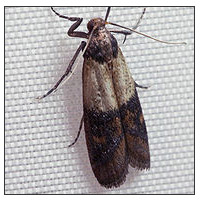 By far the most recognizable in our food supplies, the adult moth can have a wingspread almost 7 millimetres wide. They are copper-brown and grey, are folded backwards in a resting position, showing copper and grey bands of colour. Adults do not feed on stored products, but the larvae will feed on any coarse flour, processed foods, whole seeds, dog food and spices. Adult moths lay their eggs directly on the material, usually at night, and over a two or three week period, will lay more than 400 eggs. Indian meal moth larvae feed not only on coarse ground flour products, but also seeds and whole grain products, dried fruit, nuts, chocolate, beans and most products manufactured from these ingredients. Indian meal moths are serious pests both commercially and domestically. The larvae produce silken-type webbing throughout the material they’re feeding on. Mature larvae move away from infested materials to pupate in neighbouring cracks and crevices. They can easily have six generations per year. 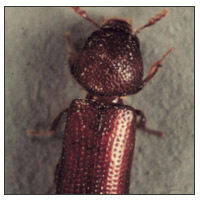 The adults are about an eighth of an inch long, with cylindrical dark brown or black bodies. With a ten power glass, you can see the tiny pits on their wing covers. They are recognizable without magnification because their heads are bent downward and cannot be seen from overhead. Both adults and larvae attack and feed upon whole grains. The larvae may also feed on flour products as well as whole grains. Larvae complete development inside grain kernels. Adults have very powerful jaws that can also bore into wood as well as whole grains. The female can lay up to 500 eggs in her lifetime, making her quite prolific. She lays her eggs, singly or in clusters, directly in the product. Larvae will feed on grain products themselves, but can also bore directly into grain themselves. The larva bores directly inside the kernel and pupates. 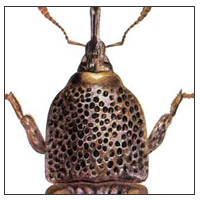 The adults are accomplished fliers. The females lay their three to four hundred eggs by using their ovipositor to insert one egg into each seed or kernel. Eggs hatch in a few days, and the larvae will eat the inside of their kernel, pupating inside. The entire life cycle takes one to two months, depending on temperature. Their life cycle takes no less than a month or so, and is quite similar to the Rice weevil. Maize weevils are larger and better fliers than the Rice weevils.